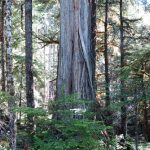 The Cypress Trees (Yellow Cedar) is a medium-sized tree that can reach average heights of 24 m or more, it has a broad, trunk that has vertical grooves. Cedars, both red and yellow, usually spread out widely at the base. The crown is sharply cone-shaped, with branches that spread out. The needles are scale-like, dark bluish-green, slender and sharp. Cones are round, up to 12 mm in diameter, berry-like in the first year but becoming woody as they mature. Read More…. 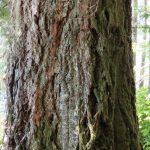 The Douglas Fir trees are a large tree that can reach heights of 90 m on the coast and 45 m in the Interior. Older trees have a long, straight, branch free trunk and a short crown with a flat top. The bark is smooth, grayish-brown, with resin-filled blisters when young, the bark becomes very thick with age and deeply grooved, with dark reddish-brown ridges, sometimes with large patches of running sap. This sap makes a great fire starter. Read More…. 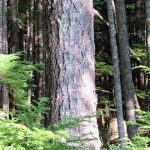 The Grand Fir Tree has a thin bark which makes it susceptible to fire. But since advances in fire suppression has decreased the damage from fires, the grand fir has increased its populations in BC. These forests are often home to bears, deer, cougars, owls, woodpeckers, salamanders, frogs and the mice and voles. The bark is smooth and grayish brown with white spots and resin-filled blisters when young but the bark becomes rough and scaly with age. Read More…. 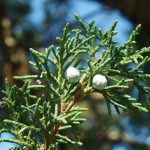 The Rocky Mountain Juniper Tree is small with a wide, irregular crown with a wildly twisted trunk reaching 13 m in height. The needles are flat and twisted, in pairs and barely overlapping but covering the twig in 4 rows, but on young, faster-growing branches the leaves may be longer and more needle-like. They are pale yellowish to green, turning to grayish-green on older branches. The cones are rounded, small and located at the ends of the branches and are a bright to dark blue color with a grayish tinge. Read More…. 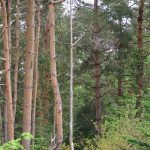 The Ponderosa Pine Trees are a slender, straight tree which grows throughout most of the province including a few spots on Vancouver Island. The needles occur in groups of three and are up to 20 cm long, they are usually a dark green color. The cones vary in shape from conical to egg shape, up to 15 cm long without stalks. The bark is thin, orangey-brown to grey and finely scaled. Read More…. 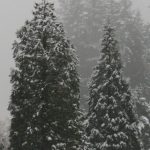 The giant Sequoia Tree is one of the worlds largest tree species. They have a fibrous, reddish-brown trunk that is much larger at the base and tapers to the top. When they are young, they have a conical shape to the branches that reach right to the base. When the trees get to be giants, they will have very thick trunks that have no branches for more than 3/4 of the height of the tree. The Giant Sequoia Tree can reach up to 75 meters in height and diameters of more than 7 meters. Read More….

The Sitka Spruce Trees are large trees that can reach heights of up to 70 m tall and 2 m across when mature. It grows along the Pacific Northwest coast in a narrow band from sea level to about 800 m. Sitka spruce grow on all of the BC coast. Sitka spruce grows with western hemlock, western red cedar, and yellow cedar. Blacktail deer, black bears, and many smaller mammals abound in the Sitka forest stands. Read More…. 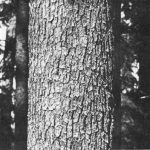 Western hemlock grows with many different tree species. Occasionally, it can develop into pure groups of trees. It can tolerate shade and grows abundantly underneath mature trees, where it provides an important source of food for animals. It grows along both sides of the coast ranges, from sea level to mid-elevations, as well as in the Interior wet belt west of the rocky mountains and on all parts of Vancouver Island. Read More…. 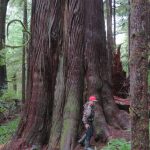 The western red cedar is a large tree, up to 60 meters tall when mature, with long drooping branches and a trunk that often spreads out widely at the base. The first people called the Cedar Long Life-Giver and referred to the tree as Mother.  The first People used the wood to build their longhouses, ocean-going canoes, for clothing,  baskets, rope, medicine and the list goes on.  Cedar bark is gathered by peeling it from trees, you can do a cut in the trunk and peel up,  strips can be as long as 10 meters. Read More…. 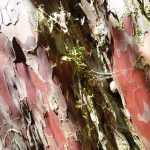 The western yew is an important food for black-tailed deer, elk, and several birds including cedar waxwings and nuthatches and various small rodents eat the fruit. In so doing, they scatter the seed away from the tree. It occurs scattered throughout the wetter forests of the coast and the Interior wet belt, primarily at low to mid-elevations. You can find on all of Vancouver Island. Read More…. 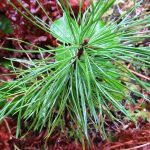 Western white pine is susceptible to white pine blister rust, which causes portions of the tree to turn an orangy brown color and die. The rust is difficult to control and prevents the tree from being of commercial importance. I only know of one tree on Vancouver Island that shows no signs of rust, it grows up by twin lake, this tree is very large and quite impressive. It grows along the portage trail leaving twin lake, its one of the biggest white pine trees I have ever seen. Read More….

Hi, my name is Patrick (Bud) Logan. I am the owner of gohiking.ca. It's a site my boys (Robert and Forrest), and I have been building to showcase the wonders of the pacific northwest.